The transport and chemical characteristics of the regional trace-gas cycles in East Asia, with specific emphasis on ozone and mineral aerosols, are the subjects of our current NASA grant under the 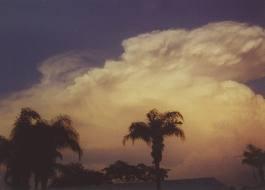 ACMAP program. Through our recently renewed proposal we will continue to focus on the identification and quantification of the role of aerosols as reactive surfaces in the Asian troposphere and evaluation of the impact of regional emissions from East Asia on the Northern Hemisphere. The following inter-related research objectives will be pursued:

The approach we are following to study aerosol/chemical interactions is to utilize a regional-scale, process oriented model (i.e., STEM-II). The basic modeling approach, and processes considered are presented in Figure 1. The model is designed as a flexible framework that can run in both on-line and off-line modes, and consists of a series of plug-and-play modules. The model can be run with meteorological inputs from MM5, RAMS, or objectively analyzed NCEP or ECMWF fields. The model includes a size-resolved inorganic aerosol module that considers aerosol dynamics, surface chemistry, and gas-to-particle exchange. The aerosol model calculates the aerosol composition of inorganic soluble species (sodium, potassium, calcium, magnesium, ammonium, sulfate, nitrate, and chloride) and the distribution of volatile species (ammonium, nitrate, carbonate, and chloride). The approach taken is to treat gas/particle exchange as a kinetic process under thermodynamic constraint (Kim and Seinfeld, 1995; Meng et al., 1995; Song and Carmichael, 1999a, 1999b, 2000). This aerosol module has been incorporated into our three-dimensional model (STEM-II), along with on-line dust and sea-salt aerosol emissions. Windblown soil emissions are modeled based on the work of Gillette and Passi (1988) and Marticorena et al. (1997a,b). Sea-salt generation is based on the work of Monahan et al. (1986) and Gong et al. (1997).

The model has been used in a series of studies that include: (1) the modeling of dust transport in East Asia and the interactions of  trace-gas species with mineral aerosols for the period of May 1987 (Phadnis, 1999; Phadnis and Carmichael, 2000a; Xiao et al., 1998); (2) the simulation of smoke associated with a forest-fire episode in Northern China for the month of May 1987 (Phadnis and Carmichael, 2000b); (3) process simulations to better understand aerosol/chemistry interactions including partitioning of nitric acid and direct ozone reactions and renoxification reactions on aerosol surfaces (Zhang and Carmichael, 1999; Song and Carmichael, 1999a); and (4) simulations of sea salt and mineral aerosol during the PEM-West B period to study processes influencing the aging of aerosols in East Asia (Song, 1999; Song and Carmichael, 2000). Furthermore, through a DOE Atmospheric Chemistry Program (ACP) grant we have been conducting laboratory experiments focused on NO2 and HNO3 reactions on mineral oxides, calcium carbonate, and actual Chinese dust surfaces (reaction rates on actual Chinese soils are found to be similar to those on mineral oxide surfaces) (Underwood et al., 2000; Goodman et al., 1999). Reactions involving NO2 are found to produce particulate nitrate and gaseous NO.  However, the overall importance of these processes, as well as the relative importance of the different major reactive primary aerosol surfaces (i.e., mineral, black carbon (BC), andsea salt), remain unquantified. 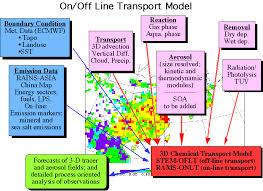